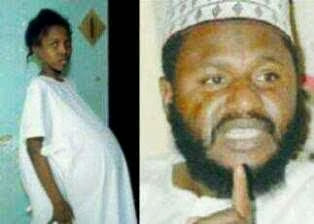 For some few days now, we have had some forms of protest against the recent bill that was passed into law in our Country. A bill which advocates Child-Marriage.
While the Chief Advocate for this law has been Senator Yerima. It is truly disturbing that young people, especially the Girl Child may be denied their childhood forever... I still cannot imagine the rationale behind giving out the hand of a CHILD as young as 9 years old out in marriage.
This is insane!
The article below was the response of Senator Yerima to why he advocated for under-age Marriage, do you think he is right, enough?

SENATOR AHMED SANI YARIMAN BAKURA REPLIES HIS ENEMIES
''Nigeria has many uncountable problems and none of them is early marriage. As a matter of fact early marriage the solution to about half of our problems. For those who wonder if I can give my daughter(s) out in marriage at the age of 9 or 13, I tell you most honestly, I can give her out at the age of 6 if I want to and its not your business. This is because I am a Muslim and I follow the example of the best of mankind, Muhammad ﺻَﻠَّﻰ ﺍﻟﻠَّﻪُ ﻋَﻠَﻴْﻪِ ﻭَﺳَﻠَّﻢَ .
In Islam, marriage is not only about sex, it is about family and helping one another in achieving their goals, which is the attainment of Paradise.
In Islam, a girl can be given out in marriage as early as 6 years old, but consummation of the marriage can only be done when the girl becomes physically mature and she gives her consent to it because unlike English law, it is not permissible for a man to rape his wife in Shari'ah Law.


These are your daughters, and this should worry you and not Yerima's private matters. So ask me again why I support early marriage and I will slap the Jinn out of your head''.
- Senator Ahmad Sani Yarima

Maybe, it is not enough for him to tell us HOW girls behave in his city. He needs to tell us WHY they behave the way they do..as this would help proferr necessary solution to the moral decadence in HIS city...and NOT compound it. Already, there are 800,000 suffering from Vesicovaginal fistula. This is epidemic and not a national pride. Let's save young people, let us save ourselves. As age of 9,10 etc aren't suitable for marriage! They are Kids, Not Brides ‪#‎ChildNotBride‬
Signed
Tosin Taiwo 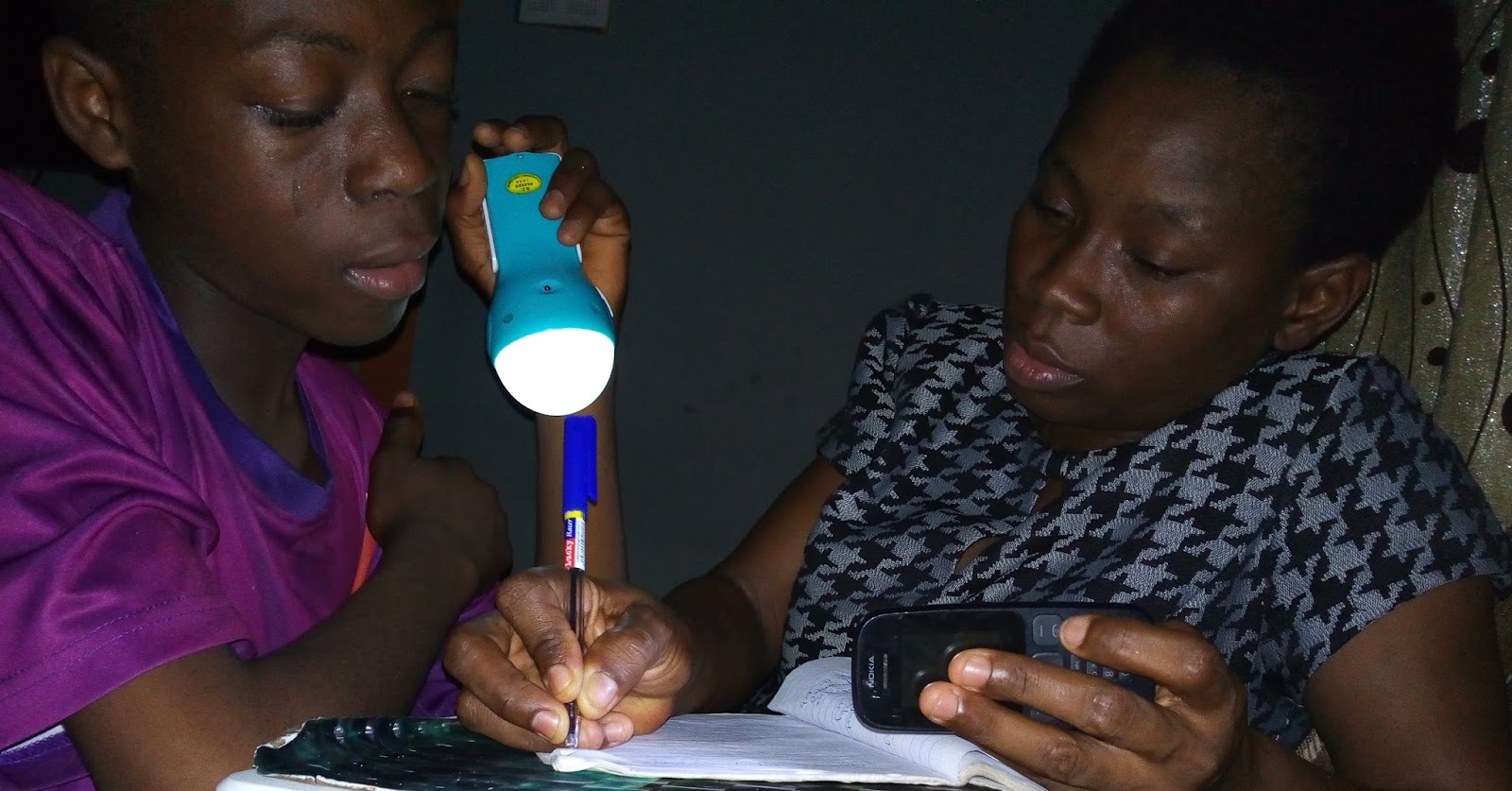 Excerpt from Tosin Taiwo's Facebook Page.  So many things about the young man in this photograph, that inspires me. One of them? He believes I have solution to all of his academic home work! Aahh. Interestingly, he is one of our sponsored children in high school who has been on sponsorship from nursery 2, till date! #terrificSponsors. God bless them. #Street2SchoolNG. For every home work that he cannot solve. ScholarB would take the stress of walking down to my house with his 📚 books. He believes I am a genius. :D Hehehe. During his common entrance examination, maths was our favourite subject as weekends were set aside for problem solving. :) Okay, It was going to be an interclass debate in his school today, and as one of the debaters..... ScholarB was around for hours yesterday, as we spent time developing points on why democratic governance is the best form of government. He is in JSS 1. Apparently, as shown in the photograph, (which was shot by my little one) lack 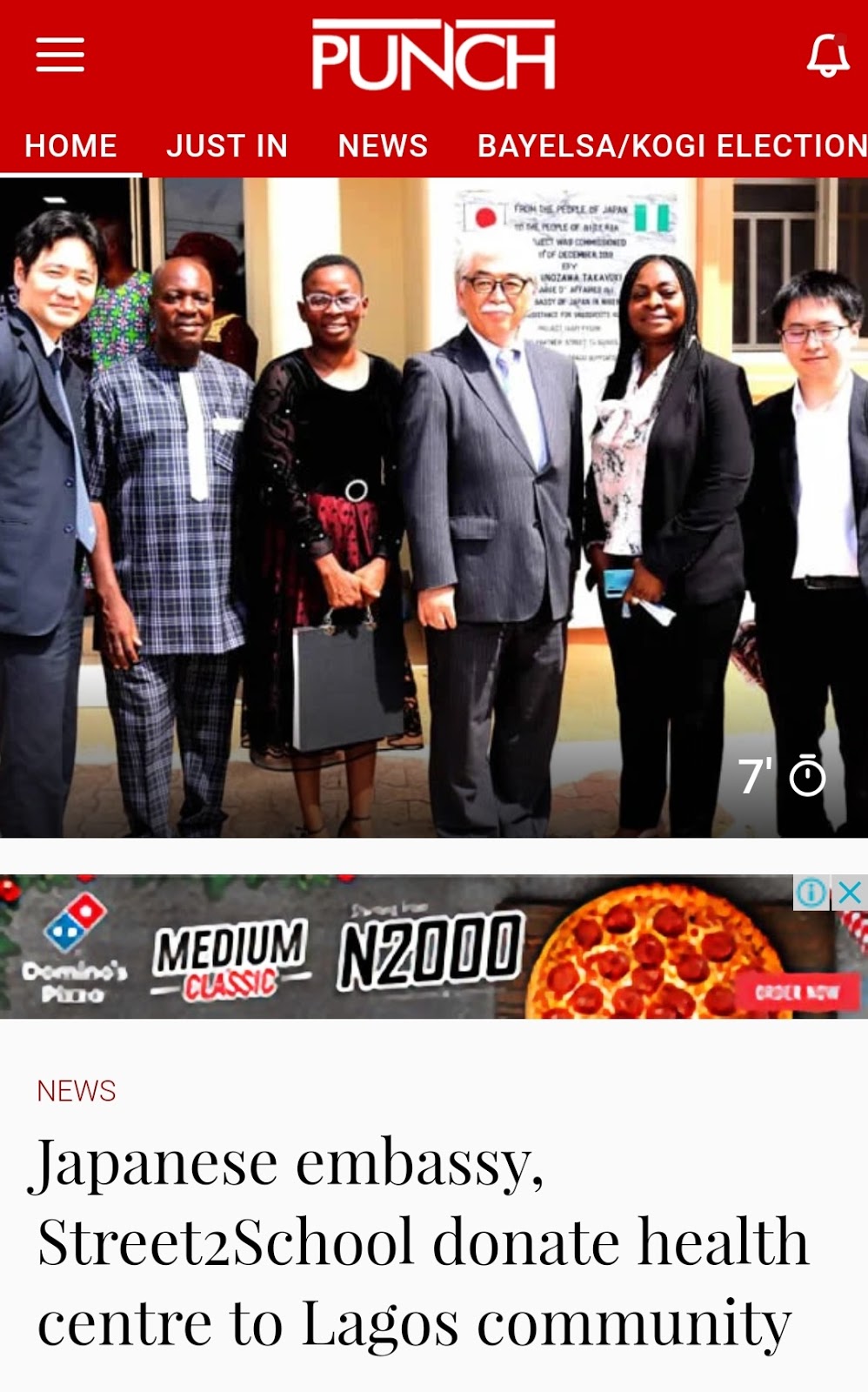 The PUNCH Newspaper: The Embassy of Japan Commissions a Health Project in Lagos State

Japanese embassy, Street2School donate health centre to Lagos community Published December 13, 2019 From left: Head of Development Cooperation, Embassy of Japan, Mitsuhiro Inamura; Founder, Street To School Initiative, Mrs. Oluwatosin Olowoyeye-Taiwo (third left); Charge d'Affaires at the embassy of Japan, Mr. Takayuki Shinozowa; Lagos State official, Dr. Yewande Adesina, and others at the inauguration of a primary healthcare centre donated by Japanese Embassy to Surulere Community, Agbado/Oke-Odo LCDA, Lagos State Samson Folarin The Embassy of Japan has teamed up with a nongovernmental organisation based in Lagos, Street To School Initiative, in the provision of a primary healthcare centre for residents of Surulere Community, Agbado/Oke-Odo Local Council Development Area. It may be recalled that The PUNCH had reported the lack of primary healthcare centres, good roads and public primary schools in the fast-growing communities. Based on The PUNCH reports, 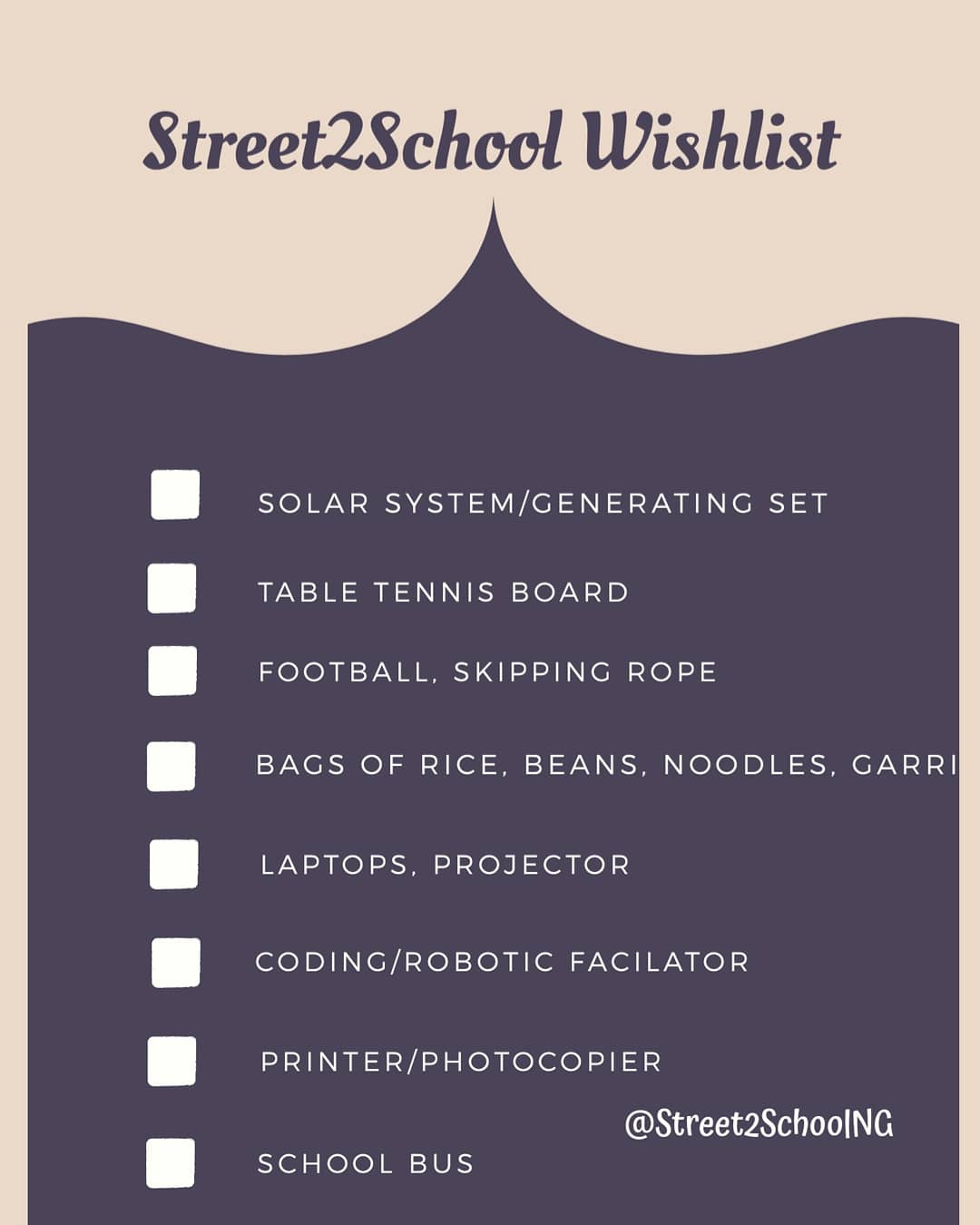 OUR Wishlist... Could you help, please?

Hi Friends, Trusting this meets you well. In order for us to serve the kids better, we thought to share with you, our #Wishlist. Kindly swipe...and send a mail (DM) to support, please. 🙏 #TogetherWeDoMore #EveryChildCounts #Street2schoolNG #Education #RaisingGlobalLeaders #EveryChildCan Happy Weekend.