Showing posts from December, 2015
Show all

December 29, 2015
Running a nonprofit organisation, especially in Nigeria  is not as pleasant, easy as people think. Never a smooth ride, most times, but for His grace! His sufficiency, His direction, His faithfulness!
This year, we are so thankful for closed doors.
Post a Comment
Read more

December 24, 2015
Dear Friends,
It's been an adventurous year 2015. Thank you so much for all you do to making this year memorable for the children we serve, thank you for your support, unfeigned love, prayers, and kind gestures. Thank you for rekindling hope through your acts. It means so much to every one of us. Thank you. May God bless you so richly.
Wishing you a very pleasant year 2016!
Merry Christmas..

December 20, 2015
The 2015 General Certificate Examination (GCE) result is out!
Wow! How time flies....
Twas just some few months back when we did fund raise to support 23 less priviledged young people to register freely for the GCE examination....from the young man whose momma couldn't pay the total GCE bill in the bank, to the lady who had to drop out of school, and had given up hope on writing WAEC/GCE due to financial situation at home.. We did support.
Today, It's wonderful to get feedbacks from some of them. It's inspiring.
Education, every child deserves a chance. #iSupport #weSponsor. Special thanks to our esteemed friends & Partners in this crime..oops, CAUSE! :D Thank you.
One of the feedbacks: "Thank you very much for the GCE sponsorship, may God send helpers to you from East, North, West and South, Amen. Here is my results: English C4, Physics C5, Economics C5, Maths C6, Chemistry C6, Biology E8, Technical Drawing ABS"

December 19, 2015
The pictures show children of Helper's Academy in their cultural regalia. It was their Creativity and Cultural day which was held on the 17th day of December, 2015

December 15, 2015
We wish to thank everyone who supported and donated towards the education program of O-Onofe. Especially, Mrs. Ochonogor Tolulope and Mr. Odewale Olaniyi. Thank you so much for your unfeigned support .
O-Onofe who lost his single parent and father (financier) some weeks after gaining admission into the University in 2010, was one of our high school mentee in 2009.
He was one of the best graduating high school student from his school Education District and we were invited to attend his award giving ceremony held at Unilag. Also, he got a high JAMB score, then, which made JAMB to keep a close tab by calling his school administrators, to investigate and inquire about his academic history.
Despite all, he was undaunted in his aspiration to study Agricultural Science at the university.
Today, he graduates with a cumulative grade point of 4.16 from the Federal University of Agriculture, Abeokuta. (Formerly UNAAB).
In his words, he says...."I am so grateful to God and the people He used…
Post a Comment
Read more

December 09, 2015
Early Christmas pack for our girl.  Thanks to our Donor.
Now, what if every child who needs them, gets'em? #Clothing #Noodles #Rice #ChristmasGifting.

It Truly Doesn't Get Any Better...

December 01, 2015
From the..
Children who could do this (some paperwork etc) because they NOW have the opportunity to go to school to learn and think critically...like other children, do.
•
•
•
To those
In higher institution of learning (sponsored), such as this beautiful, young woman who sent in this letter to us some hours back!: (I'm through with 2nd semester examinations and we're now on break ma. It would have been impossible without your help
and encouragement ma. I'm now in 200 level and will forever be grateful
to God Almighty and everyone striving to give hope to the hopeless and making the world a better place!)
•
•
•
We are so thankful to God all, we wish you and EVERYONE of our FRIENDS, a prosperous month of December!!! It truly doesn't get any better, without you all.

Thank You for everything. 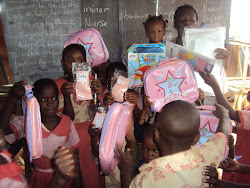